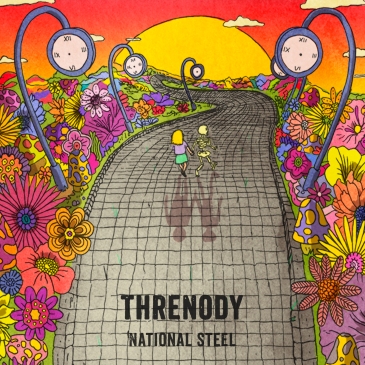 All lyrics written by Michael Hattem between April and July 2018. All mixing and mastering by Michael Hattem. Original recordings of all tracks except “Running Out of Time” and “Without Me” were made between 2007 and 2008 in Brooklyn and Staten Island, while tracking for those two songs and all final tracking for the original songs (including some instruments and all vocals) was done between April and July 2018 in New Haven, CT. Final mixing was done between July and October 2018 in both New Haven, CT and Galesburg, IL, and the record was mastered in November 2018 in Galesburg, IL. Threnody was released on November 26, 2018.

ON THE ORIGINS OF THE RECORD:

I began recording this record in 2007 following the release of Anomie. Having started school in the fall of 2007 with one son and another on the way, I kept trying to make progress, laying down basic tracks for about a dozen and a half songs by early 2009. At that point, however, I was forced to shelve the record because my personal and academic responsibilities made it impossible to finish and over the course of the next ten years, my disappointment at not finishing it grew. So ten years later, after having earned a PhD in American history and needing a distraction from my academic life, I resumed work on the record. Besides the two new songs (“Running Out of Time” and “Without Me”), all of the songs needed lyrics written and final vocal takes, while a few tracks still needed a bit of instrumentation. After more than six months of work, the record was finished and finally released in November 2018,  ten years after it had been abandoned.

HOW THE RECORD WAS FINISHED TEN YEARS LATER:

To finish this record required “rescuing” the original multi-tracks. Originally recorded in Sonar (6 and/or 7, IIRC), the project files could only be opened in Sonar. So I downloaded a version of it, installed it on my brother’s computer (as it is a PC-only program), and then opened up each of the projects. I took down the BPM of each track and exported each project’s MIDI and each project as an OMF file with the hope that importing the OMF file into Logic would then arrange all the individual WAV files in the project’s Audio folder. That did not work. So I had to create a new project in Logic for each song, set the BPM, then import all the individual audio folders (which were not stems) and then listen to them, identify them, and then arrange them where they were originally. This was a painstaking process to basically recreate the tracks in this way. However, once it was done and I imported the MIDI tracks, pretty much everything I needed was there. Luckily for me, I had bounced down most of the MIDI tracks to audio in the original projects for many of the VSTi’s I no longer had, including all of the Mellotron and Piano sounds from Reason’s Abbey Road Keyboards refill, which is now out-of-print. I did however have the MIDI tracks I used with EZ Drummer, which I purchased when setting up the new studio. So while I didn’t have the specific expansion packs I had back in 2009, I had the drum part MIDI, which at the time had required significant tweaking from the original grooves (e.g., “Days of Grey” and “Look My Way”). Once all the tracks were setup, I then set upon the twin tasks of getting working mixes going and writing lyrics for each of the songs. The working mixes came together pretty quickly because I knew what the songs sounded like in my head and had listened to the old early mixes periodically over the previous ten years. I then began recording vocals in late May. For mixing… because my monitors were new and the room in New Haven was horrible I didn’t have the time to learn a new set of monitors to the point of being able to mix confidently on them so I did most of the working mixes through Sony MDR-7506 headphones. The headphones, however, were so bright that it was impossible to get an accurate mix on them. Once we moved to Illinois and I had a dedicated room for my studio, I had logged about six months listening to the monitors and had them in a much better space, so the final stage of mixing and mastering was able to be done primarily through the monitors.